It was a beautiful morning in ‘The Rainiest Place on Planet Earth’.

We didn’t have far to ride as we were hiking today to the living bridges, it was 20km along the mountain ridge before we weaved down a few hundred metres looking out at the tropical forest wrapping itself around the amazing valley around us. Not too many km to the south were the plains of Bangladesh stretching as far as the eye could see, wow.

We started hiking down into the valley, it was so steep and we were told it was 3km to the living bridges which doesn’t sound too far, a 6km round trip but this path went straight down at a very steep angle and ‘what goes down must come up’! I’ve been ridding my bike for 6 months now and I’ve done so little exercise I was getting the shakes in my legs after only 500 metres or so!

As we descended through the tropical forest there were massive spiders sitting on their webs only a few metres away and so many different butterflies, so, even though my legs were starting to feel the pace I was loving it. We passed a couple of villages and after and hour and half we arrived at the living bridges which were amazing and such a great idea. They were both beautiful and very practical.

Just before the living bridges we had to cross a number of steel and wood foot suspension bridges and I had seen a really great place to try my first jump into a plunge pool in so many years. As I haven’t lost my ability to do stupid things I ran off the top of a 10 metre boulder and hit the right spot in the clear blue plunge pool below, what an exhilarating feeling.

Now for the hard bit, the climb back up to the top! As we climbed we noticed somebody had counted the steps and occasionally put a number on them, we missed the last few and estimate there were 2,000 steps, that’s 2,000 up and 2,000 down and my legs were starting to get weak.

Ridding back to find a hotel we bumped into 4 of the Myanmar group so we stopped and all had lunch together before a very tired Dan rode to Shillong to find a hotel. 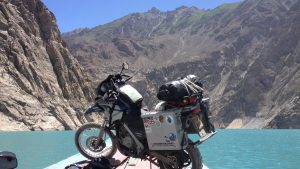